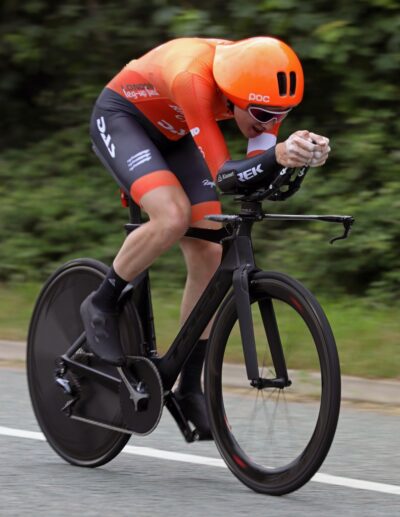 In late 2019, I applied for my Irish citizenship with the main intention of being able to keep an EU passport following the UK’s disappointing exit from the body. Unfortunately, when Covid hit, the Irish passport office only processed emergency applications and mine was on hold for around 18 months. In the spring of this year, it was finally processed and I had my citizenship confirmed. My grandmother was as Irish as you could get and I had always planned on getting my citizenship, but it was not until her passing and all the documents being uncovered and compiled that I finally got around to it.

Once my application went in I started to think of whether it may be better for me to change my UCI nationality over to Irish since they seem to give opportunities to deserving riders, and not just ones that have gone through the academy. It became clear in my mind fairly quickly that this would be the best for my future cycling career. Seeing Ben Healy’s success as an ex-British rider and the opportunities he has been given has been amazing to witness and I hope one day I could potentially have similar ones.

The actual UCI bureaucracy went by surprisingly smoothly. Within two hours of getting my citizenship confirmed by the Irish Immigration Office I had an Irish UCI license. This was something I thought may take months, but no: two hours! The people at Cycling Ireland have been nothing short of incredible and made my transition as smooth as I could imagine. Fortunately for me, the nationals had been pushed from their usual June slot to the end of the season, similar to the British ones. This played into my hands as it allowed me the opportunity to race them. With a very uninspiring UK calendar, I turned my focus to the Irish national time trial and road race with the hopes of doing as best a ride in each one as I could muster.

Everything was going to plan with several top fives in National B road races along with encouraging power numbers and sensations coming into the month of August. The race rhythms were getting to where they needed to be for my two UK targets: the Lancaster and Ryedale GPs. There was just one small hurdle to overcome before those two races: the Tour Series. I had raced the Tour Series a few times before and got half-decent results but I am very aware that crits are not my specialty. I was excited for the races though and probably equally as excited to be able to spend some time away with the team.

We headed up north for ten days for the three rounds of the Tour Series and the Lancaster GP. The week started disappointingly for me after being held up behind a crash on the first lap and then spending the whole race by myself. I was disappointed and angry at myself for letting that happen so when it came to the Sunderland round I was determined to prove to myself I could do better. Everything started really promisingly. I was up the front of the race for the first two laps right up until someone rode into the back of me. This person was doing 60 km/h while the whole bunch was doing 40 km/h into a tight corner. They came charging into the back of me and sent me flying into the barriers. It was game over for me. I knew immediately something was seriously wrong. The full impact from the other rider was in my right calf and then I had landed on the foot of the barrier with my full weight on my arse. I barely had a visible scratch but I couldn’t really walk.

The injuries became more obvious when I was helped out of my skinsuit by my teammates and a large hematoma was revealed around my lower back and the top of my glutes. This egg-shaped lump was taking ages and ages to go down and it was becoming increasingly likely that I would not be able to race either of the two August National Road Series races. I ended up having two weeks off the bike followed by a week of very very light riding.

It was now only five weeks away from the national champs. I knew realistically my road racing would be compromised with this set back so decided to go all in with the time trial. I contacted a local time trial-specific coach, Paul Hart from Hart Performance Coaching, to see if I could get back into the shape required to do a respectable ride.

In the two weeks off I had lost roughly 30-40 watts so knew I would be up against it. Most of the rehab work was done on the turbo with a large focus on improving my core, back, and glutes so that I would be able to hold as aggressive a position as possible. The nationals course was on a single carriageway A-road equivalent in the Wicklow region. It was slightly rolling but had long stretches of flat road. I knew that I would not be able to match the WorldTour guys in terms of power output, but I was confident that I had a lower CDA and therefore I could hopefully close the speed gap.

In the final five days before the nationals my power was nearly back to where it had been pre-crash so I knew that a good ride would be possible. Since the nationals would be the only two races of the whole year where I could show myself to bigger teams after my misfortune in the summer I went all-in with my preparation. I drove out to Ireland by myself a week before the race and spent the lead-up recceing both the time trial and road race courses. Not only was this to know where I would be going, but also where time could be saved. The TT had several roundabouts all of which I rode several times as fast as I could to see if I had to brake or not, and if I did, how late could I get away with it.

I arrived on the startline in the best possible shape I could be in and with the best preparation I could do. As long as I had an accident-free ride, I knew I would not have been able to do anymore. In the end, I placed 5th, only 18 seconds off of the podium. Obviously, there was a part of me wishing I had got a medal, but I was really proud of my ride. I had just executed maybe my best time trial ever and all of the hard work had been worth it.

After this, the road race was just a bonus. My close friend and road coach Steve Skuse flew out the day before to support me for the race. Without him I would have been pretty screwed as I would have had zero support on the side of the road – so massive thanks to him for the help. The race was on a pretty hilly circuit with two climbs a lap over six laps. The first was maybe 6% for five minutes, whereas the second was far steeper with pitches of closer to 20% and lasted about three and a half minutes. The first time up the shallower climb Ben Healy attacked hard. I managed to follow but I was on my limit. My legs were just not where they needed to be for this race, unfortunately. So when Nicolas Roche attacked over the top I was dispatched. With a group of nearly 20 up the road that was almost a race over for me. I was in a bit of a hole but kept rolling around. Rider after rider was being distanced from the front group until with a lap to go there were only 11 away.

Given how poor I felt earlier in the day I decided it would be wise to try to get a headstart from the bunch into the final climb so attacked on the descent with George Peden (PB Performance). The bunch seemed pretty unmotivated and let us go. We rode well together up the climb, staying ahead of the bunch, and then railed the descent. We managed to keep away to the finish where I managed to ride away from George with 2 km to go to finish 12th. After a rather lacklustre season of only racing National Bs and time trials I was very very happy to finish with two very respectable results, especially one on the road.

I am writing this article after my season finished yesterday with another 5th place at the National Closed Circuit TT Champs back in the UK. (Before anyone asks I am allowed to ride this event with my Irish license. It is a CTT and non-UCI affiliated event so anyone living in the UK is eligible to ride it.) I am currently on a plane (well not by the time you’re reading this!) on the way to Mallorca for a week with some mates from home in Essex to unwind and soak in a little sun before putting my feet up at the end of the month.

Nothing is confirmed for next year, but I will have finished all my studying having completed my Masters in Environmental Engineering in September. I will continue my part-time data analytics job next season as I am not quite at the level yet where cycling can support me financially, but I will have significantly more time to ride my bike which is exciting.