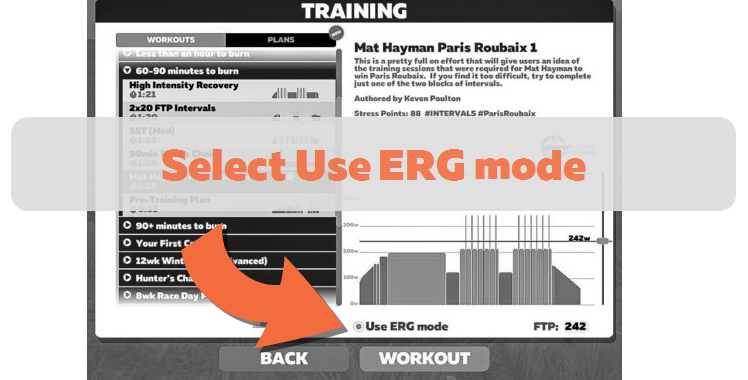 I didn’t quite appreciate how divisive the ERG subject was when posting previously. I wrote how I disliked ERG on the basis that it took control from you as a rider and prevented riders from learning key skills they need to achieve their real life goals. I have since received a number of messages and emails.

I now want to talk about the practical training side.

This Thursday the HPC coached athletes have the privilege of a racing simulation session. I did this last night to demonstrate the difference with ERG. The main part of the session are two inverted pyramids. The intensity is high. Each pyramid is 12mins ABOVE FTP. The target power changes every minute.

1st Pyramid: With ERG ON.

Because the target power changes by 10 watts every minute its much easier to use ERG. There is little faff. You can just concentrate on your cadence and the effort itself. The problem is the intensity, and often intensity and ERG are not a good match. Because the turbo controls the resistance my cadence starts a little lower at 96 (versus 100). Gradually throughout the interval my cadence reduces. I tried to accelerate the cadence to make the turbo reduce the resistance but gradually my cadence slowed and my torque had to increase as I fought against the ERG. This took its toll as the pyramid progressed, my cadence continued to fall, I continued to fight it by accelerating my cadence but eventually as my cadence fell to under 60, I quit with the final 90secs remaining. 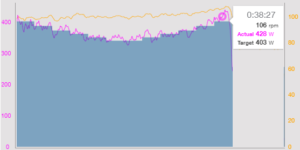 2nd Pyramid with ERG OFF.

Here I was able to start with my natural cadence (100). I was also able to reduce my power under the target for small sections when I was feeling tired. The power is far from smooth in fact it’s a little erratic in places as I suffered but I was able to raise my cadence throughout and raise my power. Because the target power changes 10 watts each time it’s difficult to make the graph look perfect but that’s not important. What’s important was that I was able to complete my 12min interval, at a cadence I use on race day, I was able to raise the heart rate, and this created a fantastic training effect. So the chart might look less controlled but its more realistic and it was significantly better training as I could lower my power when I wanted based on RPE, and I could adjust my cadence freely.

Hope that clears up some of the emails!